Most NH voters would back ‘unity ticket’ in 2020: poll

A majority of New Hampshire voters say that they would support a “unity ticket” in 2020 featuring a Democratic and Republican candidate on the same ticket, according to a new poll.

A Triton Polling & Research survey commissioned by UniteAmerica showed that 6-of-10 New Hampshire voters said they would support a ticket featuring their “preferred presidential candidate” pick a vice presidential nominee from the opposing party as a method of bringing the country together and healing divisions.

The unity ticket idea found support from a majority of voters in both political parties as well as independents in the state. Republicans showed the least support for the idea but still supported it with a 51 percent majority.

Nearly three-fourths, 74 percent, of voters in the state told pollsters that they see political dysfunction as the major issue facing America at this time.

“Alienated by both parties and most concerned about political dysfunction, a majority of New Hampshire voters are ready for a “Unity Ticket” ticket in 2020 than can heal our divisions and fix our political system,” UniteAmerica wrote in a blog post accompanying the poll.

Triton Polling & Research’s survey contacted 901 New Hampshire voters by phone from Dec. 4-5, 2018, and carries a margin of error of plus or minus 3.3 percentage points.

Explore the benefits of choosing Triton for your polling, survey, and/or research needs. 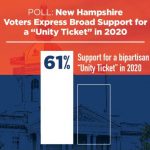